April 22, 2019
It's been a while since I've blogged, mostly because I had nothing to say. But I'm happy to say that now that I do! 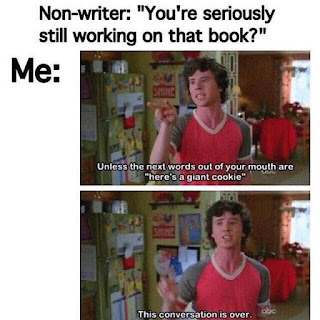 I've hit a major breakthrough with Dump and Chase, book #5. It's almost done! Just a few more chapters to go, and then it goes out to alpha/beta readers, and then it'll go out for ARCs. (Are you a member of my ARC team? If not, you can still sign up!)

What does that mean as far as a release date? End of May, early June. I'll know more once the chapters are done and I get back the initial feedback.

You guys have no idea how good it finally feels to have a more concrete idea of when this book will be out (I've only been writing it since... 2017!) I've fought through a lot of impostor syndrome along the way; it's hard to feel like a writer when the writing isn't happening like you want it to. I've barely been on social media as a result.

And just in time! Because "Christmas Crosscheck" is releasing on its own on July 25 for a Christmas in July celebration! "Christmas Crosscheck" was my contribution to the USA TODAY bestseller, Hockey Holidays. On July 25, the story will be available again as book #6 of the Dallas Comets series—including some additional chapters. Want to know how Christmas Day unfolds for Bryan and Georgiana? You'll have to read it to find out!

Buy links will be coming soon, in the next few weeks. Keep an eye out on social media so you can preorder! Also, links will go out via my newsletter, so you can sign up for that as well if you aren't already.

After that, I'm taking a mini-break from the Comets to work on a top-secret trilogy set. Anticipated release will be in fall/winter 2019. I still have a lot of kinks to work out there though, so that's all you'll be getting from me on that subject for a while.

I hope y'all can sit tight just a little while longer, because I'm very close to sharing Ben and Lennox's story. There's something different about this one, something special, and I hope you'll think the wait was worth it.