November 05, 2018
It's November! And while I usually refuse to celebrate the holidays until after Thanksgiving (which is my favorite of the US holidays, and I think it's truly underappreciated!)—but this year is different. Why? Because 'this the season for Hockey Holidays!


I've joined a team of hockey romance authors to bring you this epic anthology. And my contribution is "Christmas Crosscheck," which tells the tale of Georgiana and Bryan's first Christmas together. And—spoiler alert!—there's a proposal. You'll have to read it find out the rest! 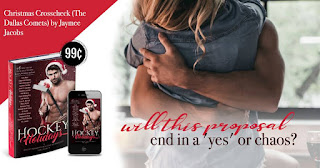 The anthology, for which all proceeds will be donated to a hockey charity, will release on November 13, so there's still plenty of time to pre-order to make sure you get this book on your eReader ASAP on release day!

And we'll be celebrating like crazy next week. First up, on the 13th, we'll be in the L. Woods PR Romance Room starting at 7. And then the party continues on the 14th in the Reader's Lounge. If you're not already in these Facebook groups, you're gonna wanna join so you can party with us!


It's been a hard week here in Pittsburgh. I was in Squirrel Hill Saturday morning at the time of the Tree of Life congregation shooting, and I've been taking it especially hard. I've had different friends living in the area throughout the years, and my days and nights there were always fun. The best part about Squirrel Hill is the diversity and open-mindedness. I hope we never lose that.

It's not easy choosing to set aside the heartbreak and look toward the good. But it is a choice to celebrate all the good coming down the pipeline, including this anthology.

I'll still need time to grieve and get over this, but we are Pittsburgh Strong, and steel is stronger than hate.