If you're friends with some authors on Facebook or Twitter,  you've probably seen the insanity and the accompanying hashtags. It's not my intention here to go into the matter; there are plenty of places online to get the details. And while I did a little rage-venting on my own profile, I don't want to publicly feed into this riotous frenzy while the courts and attorneys are working toward a resolution. I do, however, want to take a moment to say that the indie author community is a supportive, close-knit group that I'm proud to be a part of. And it's because of readers like you, who choose to support not only myself but so many authors who work hard and try to give you the best possible books.

So, what have I been up to? Well, I've been buzzing around, prepping for my trip to Philly this weekend. I'll be at Unmask the Romance in Phoenixville on Saturday! 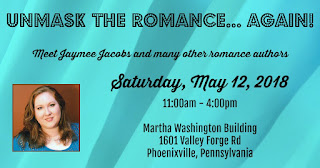 Tickets are still available for any of you latecomers!

What else? I've been enjoying my time with Flynn. Now that he's essentially toothless, he's blossoming into a whole new cat! He's feistier, chasing Anna around in a total role reversal for those two. He's scarfing down his kibble with an appetite I didn't know he had. And while he's filled out and gained back the weight he'd lost when it hurt too bad to eat, I'm not exactly sure where he's putting it all.

I'd wondered how his personality would "change" after his teeth were removed and the pain was gone (or at least mostly gone). I expected him to come out of his shell and become more playful and perhaps more cuddly too. He's not as cuddly as I would have hoped, but he's still my sweet boy—even if he's got a bit of an attitude now!

And of course I've been writing too. I'll be honest and admit I've gotten sidetracked and am way behind on my schedule (I should be writing right now! Doh!), but I'm still in love with this story. Is too soon, and maybe bad luck, to admit that Dump and Chase is my favorite book I've written so far? Because it totally is. And that's just more motivation for me to get back to work and get it out to y'all as soon as possible.

In the meantime, I have to get back to packing. Why does it feel like short trips are so much harder to pack for? I wonder what I'll forget to bring with me....