December 15, 2017
Uh, how is it the middle of December already? Seriously, I'm not sure how it happened! I took one week off from writing, to deal with a myriad of stressful things that had popped up (the end of the year is always the most stressful time for me, because of work and personal obligations), and now all of a sudden, Christmas is less than two weeks away and the end of 2017 is just around the corner!

The biggest thing that's happened is poor Flynn, yet again. He stopped eating, of course due to ongoing mouth issues. He has stomatitis/gingivitis. Stop me if I've explained this before, but basically his body is rejecting his teeth. He had his teeth cleaned in June, but he had a flare-up at the end of September and then at the very end of November.

What do you do when your body is rejecting your own teeth? You remove them from the equation.

So earlier this month, we began the process of extracting his teeth. My vet recommended removing them in stages. We started with his left side, since it appeared to be the most inflamed. He had them taken out last week, and his appetite appears to waver.

What can I say? I fully admit to being a crazy cat lady; my cats are my babies, and I am obsessed with them. In fact, I can't wait til Christmas because they are getting some great new toys.

Besides that, though, the end of the year is always a crazy time. The office I work in is so busy, since our clients are trying to get a lot of things done before the end of year. So that's 40 hours out of my week that's spent working pretty hard. For me, it's tough to get into a good mental space to write when all my brainpower is spent at work. Between work and Flynn, I took last week off from writing, as I mentioned, to give myself a bit of a break. But that doesn't mean I've stopped working.

In fact, I've got a COVER REVEAL for you! Below is the newly designed cover for Comets book #5, Dump and Chase: 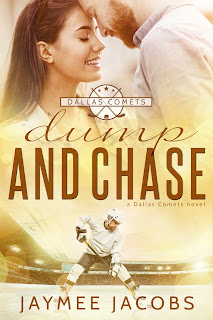 Tell me what you think! Personally, I love the yellow.

As I continue with the story, I'll be sure to give updates on its status and when it'll release. Members of my Facebook reader group, the Jay Birds, have been getting snippets and tidbits before I've made them public, so it's a great place to be. Join in on the fun!

Meanwhile, it's time for me to get back to work. I'm attending a fun sci-fi event at the Carnegie Museum of Natural History tonight that I'm really looking forward to. I hope you all have great weekends, too!