July 07, 2015
How is it possible that 2015 is halfway over? Perhaps I should think of it as an optimist would: there's still six months left in 2015. I should make the most of these next six months! 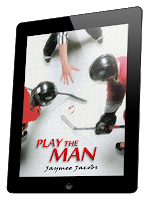 So far this year, I've managed to get Play the Man re-released with its new cover. Now, all my novels are available as both eBooks and paperbacks! As an author, let me tell you, there's nothing better than seeing your name in print!

My other big accomplishment was getting "A Valuable Trade" released independently. This was my submission to Seduced by the Game, the cancer charity anthology that raised over $18,000 for Hockey Fights Cancer! Today was the release day; "A Valuable Trade" is available (exclusively as an eBook) from the following vendors and subscription services:

Also, I'm happy to announce that my eBooks have been released through a couple of new vendors, and all the purchase links are updated on this very blog. I like giving my readers options!
So what's on the agenda for the rest of the 2015?

Well, I'm currently devoting my writing time to the next installation of the Dallas Comets series—that's right, the Comets are getting their own series! For now, I'm keeping that title and hockey player to myself.

And lastly, yes, I'm still working on The Back Up, even if it is on the back burner (for now, at least). I have full intention of getting that novel published by the end of the year. I'm going to work as hard as I have to make sure that happens.

If you haven't signed up for my newsletter, now would be a good time to do so, since I'll be sending out updates, sneak peeks, and giveaways that only subscribers will be privy to! The link is in the right-hand column, so don't be shy. The summer newsletter will be sent out any day now!

Thanks for tuning in. See you next month,