Not that I'm complaining; writing is probably the one activity I get the most satisfaction from doing. What could be more fun than imagining a whole alternative reality and then just jotting down what happens? I've always had an overactive imagination. Now, instead of just living in those worlds and realities I dream up, I write them down and share them with other people.

But that doesn't mean that it's always easy. I can't just sit down in front of a computer and type away endlessly. I like to have to muse over plots and characters--and most of the time, that's how the stories write themselves. However, I work full time and then engage in some fun extracurricular activities. Recently, I stage-managed for a local theatre's kids production, and then I started attending a weekly trivia contest. It's nice to have fun things to do on the side, but it does cut into my allotted time for daydreaming about my stories and what should happen next--or how things will progress. And sometimes, even though I know what I want to occur, I still struggle with the words that make it happen.

When I hit those walls, I have a few methods to try to overcome the lack of production. First, I like to give myself from time off. While I like to self-impose deadlines, sometimes it's too daunting to know that I'm not on schedule. I'm not sure I'll make my deadline to publish Shots on Net by May, but that's okay. It's not the end of the world if I don't get it done until June. I'm publishing on my own time, so I don't have editors or publishers breathing down my neck to get this finished. Giving myself a few days to decompress and stop worrying and stressing out about not writing often breaks the dam and gets the creative juices flowing again.

Another tactic I'll try is getting away from the computer. The Internet is the worst distraction--and there's no escaping it! Even if I walk away from my laptop, I still have my iPhone and all of its games and capabilities to lure me away from the task at hand. So that's when I put down all my technologies and revert to the good old standby, pen and paper: 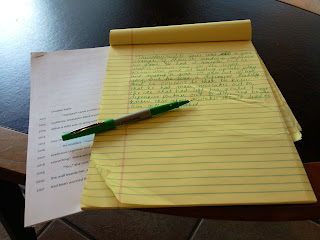 There's something completely different between writing and typing. It's smoother, somehow. It's slower, but the words flow at even pace, rather than the staccato stop-and-go of typing away at a keyboard. And plus, I get extra time to edit when I have to type what I've previously written.

Plus, it's different experience to read something on paper versus reading something on a screen. Even seeing it on paper is different. I always print things out to edit them, because of the different format. Paper provides a nice change from the computer. After all, I work a desk job that involves sitting in front of a screen for 40+ hours a week, and I can only do so much more work on my laptop before it gets to be too much.

So that's what I've been doing this weekend: unplugging from the technological distractions and plugging away the old-fashioned way--allowing myself a break so I could come back on my blog and give a general update about my progress on Shots on Net. While it may be taking longer than expected and longer than I had hoped, I'm slowly moving forward.